Missionary Update
Perú
March 23, 2011
By God's grace I was able to travel to Perú this March. Three days after arriving in Phoenix from Nicaragua and New Mexico I flew to South America to visit and dedicate three different churches.
I arrived Wednesday at about 11:00 P.M. in Lima where Brother Jorge Scabarrozzi and other brothers were waiting to receive me. Thursday and Friday were spent in much needed dialogue with Brother Jorge and catching up on what work had been accomplished in Perú. I was very happy to see that doors are opening up and that Brother Jorge has been faithful
to preach the gospel with pure love, without attacking other ministries.

Friday evening We picked up Brother Montoya from the airport at about 11:00 P.M.
Saturday we had a meeting with all of the men in Los Olivos. The Lord blessed us as we shared testimonies and reports on the missionary work that was taking place in Brazil, Mexico, Central and South America. Of particular interest to the brothers was the recent work in Brazil and Colombia.
Sunday, March 27, 2011, we had a dedication service in Los Olivos. The presence of the Lord was mighty as Brother Montoya ministered and prayed for the sick. There was great deliverance. The church is little but beautifully prepared. The people are full of love and have a great understanding of God's grace. It was a joy being there.
Monday, March 28, 2011 we flew to Arequipa where we had scheduled services Monday morning and evening and also Tuesday morning. The purpose of these services was to dedicate the new building and land that the brothers had purchased for their church. The Associate Pastor is Brother Cristóbal.
However, we missed our flight and had to take a later flight arriving in the afternoon. We had a light lunch and then decided to have an afternoon service which turned out to be a great blessing. We also spoke in the evening. Brother Montoya ministered the gospel in power.
Tuesday morning we had the Dedication service for the church which is very beautiful. There is room for about 70 people seated comfortably, an office, two rooms for lodging or Sunday School, an interior courtyard that easily sits 100 people for fellowshipping and eating, and an on site kitchen. Also there are two very nice bathrooms available for our use.
The Lord Jesus Christ paid us the honor making his presence known. There was much rejoicing and happiness.
After service we left to the airport to fly back to Lima and take Brother Montoya to the airport as his return flight was that evening. 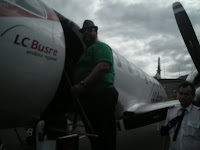 Wednesday March 30, 2011 we took a VERY small plane to Huanuco. There was literally four people on the flight! I could not stand up inside. There were only 10 seats on board. We visited with the Bieberach family. Brother Carlos the father of Brother Johann Bieberach (who currently lives and works in Prescott, Arizona) and his wife Marilu, and children Elizabeth and Carlitos.
We had service that night and it was a very simple message. We then prayed for and dedicated the meeting hall and the pulpit that is used for the services.
Thursday, March 31, 2011 we flew back to Lima. Sister Scabarrozzi was very kind to make sure all of my clothes were cleaned and ironed and packed as I still had another trip to go on after the trip to Perú. We had a great evening of fellowship that evening in Lima, and then I was taken to the airport for my 11:50 P.M. flight to Houston and then onto Phoenix where I arrived at 10:00 A.M.
My lovely wife picked me up at the airport, and then drove me to Carlos O'Brian's one of my favorite Mexican Restaurants where we enjoyed a wonderful lunch. She then drove me back to the airport for my flight to Mexico City—I was on my way to the special services in Ixpantepec Nieves, Oaxaca.
Posted by Bernabe NC Garcia, Jr. at Friday, April 15, 2011