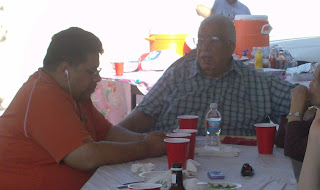 It is 12:54 A.M. Monday 05 November 2012 and I am in the intensive care unit (ICU) waiting room with my brother William NC García. All is calm; the rest of the family has gone home to rest. My brother and I will be spending the night here ready for any eventuality. I thought I should let the faithful warriors who are praying know the current status of my father.
Today was a great day. My father is increasingly alert. He is also becoming very agitated and feisty. That makes his doctor happy. He loves when his ICU patients are feisty because
it shows that they have the will to live. The first key to recover is that the patient must want to live. Dad is impatient to go home. He does not like hospitals. He is not happy that he is here. He signals everyone that visits him that they should help him get off of the bed, change his clothes and take him home.

The doctors say that if he continues his current pace of recovery, that within the next three days he will be removed from the ICU and placed in a regular hospital recovery room, from there to be discharged to his home. This is awesome and welcome news, and a complete reversal from what we were told on Friday! Truly God has performed a miracle.

Today we were blessed by the presence of a wonderful friend of the family: Brother Daniel Martin of Idaho and president of Worldwide Missionary Outreach (WMO). Despite just arriving from the mission field and his imminent departure to the Philippines, Brother Daniel flew to Phoenix to spend time with our family during our time of crisis. He arrived at 11:00 A.M. Sunday and will be leaving Monday afternoon back home. When I took Brother Daniel to see my father I was so happy to see my father's reaction. Dad was very happy to see Brother Daniel. Brother Daniel also spent a great deal of time talking with each of my siblings and expressing his love and the love of his family for all of us. The believers associated with WMO have been in constant prayer for brother García since receiving the call to prayer at 3:00 A.M. Saturday morning.

They stayed just a few short minutes and then accompanied us to dinner at a restaurant before making the return drive back to New Mexico. What a great sacrifice they made, driving five hours to spend a few minutes to pray with my dad and then making the return drive back. It makes all of us feel very humbled and honored to see their love for our dad.

I would also like to thank Brother Caleb Durón of Tucson Tabernacle who drove up Saturday morning to pray for Brother García. He arrived at the hospital about 9:00 A.M. and prayed for my dad. We are grateful for his love and prayers.

Most especially, I speak for the entire family in thanking every single one of YOU, the prayer warriors who jumped in and joined the prayer chain. Brother Mark Castillo began to call his flock the minute he received the call from my sister Deborah García de Gallardo at 2:00 A.M. Saturday morning. He called her back within the hour to let her know that the prayer chain had started, that the members of his church were on their knees in prayer for our pastor.

William García talked to Brother Frumencio at approximately 1:00 A.M. Saturday morning and the prayer chain was started in Mexico. I got a hold of Brother Alan Martin at 3:00 A.M. Saturday morning and he immediately started praying. When I spoke to Daniel Martin in the wee hours of the morning he immediately activated the prayer chain with WMO. My sister Deborah brilliantly thought of posting the prayer request on Facebook, and I copied her post, and reposted it. The response was amazing. Believers in Brazil, Peru, Mexico, and Colombia began to text and message me, by early morning, many people posted and reposted the plea for prayers involving their friends. An atmosphere of love and peace began to filter into my consciousness.

After our family meeting Friday night with mom and my siblings we realized that we could not bear this burden alone. We decided to ask for help from you, the believers and our brothers. Within six hours, before 7:00 A.M. Friday morning literally hundreds if not thousands of believers were in prayer for our pastor. Brother Daniel Martin and Brother Caleb Durón both expressed the desire to come to Phoenix. Churches like the one in Ixtapalapa scheduled prayer meetings and fasting. The sisters of Durango Durango Mexico met and began to pray. Brother Jorge Scabarrozzi and his family knelt in prayer. On and on it went.

At approximately 8:00 A.M. Saturday morning the doctor entered my Dad's room and said that he wanted to see what the situation was. He ordered that the pain medication be stopped, that the anesthesiology be stopped. He stopped the ventilator (the machine breathing for my father) and made my father sit up. A few tense moments passed and suddenly Brother García's lungs responded and he began to breathe on his own. When the doctor saw how good my father reacted he ordered that the ventilator be pulled out of his mouth and throat! Wow. Just a few hours earlier they were telling us that we had to decide on a tracheotomy or in just letting him pass away because his lungs would not function despite several attempts to make them work.

When my sister arrived in the morning and received the news from William and Joseph she did not fully understand, but when she walked into my dad’s room the attending nurse was so excited to see her. She said, “Joanna, can you believe it?! Your dad has made an amazing turn around! Yesterday they were preparing you for his death or permanent stay in a Specialized Nursing Facility, and today they are removing the breathing machine! It is like a miracle! It is like a miracle!” Her eyes shone as she looked at my shocked sister and said, “Joanna, I feel like hugging you! I am so happy! It is like a miracle!”

Joanna walked out of the room in shock, in jubilation, and in exulting prayer to our Lord, Savior, and Healer the Lord Jesus Christ. God had answered the prayers of his saints before anyone had a chance to come and pray for our pastor! About an hour after the miracle Brother Caleb Durón arrived from Tucson and prayed for my father. We thank God for each prayer and understand that although the main crisis is overcome, there is still a long road ahead of us and we covet each and every prayer that is lifted up to heaven in pro of our pastor.

Thank you, each and every one of you, for taking our father, pastor, and apostle to the Lord in prayer. May God richly bless you.